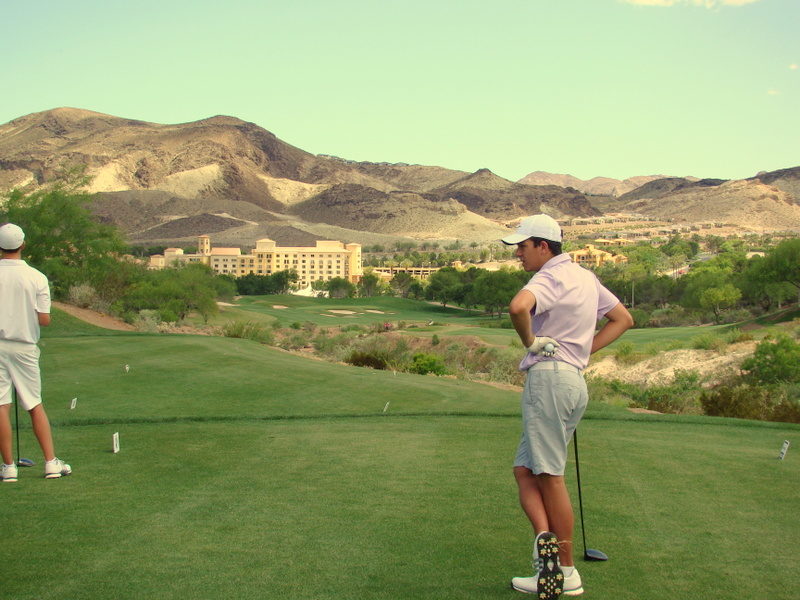 We kicked off a new event-series on the RecruitLook Junior Golf Tour that takes place over the summer months, which allows our boys & girls in the 15-18 division the opportunity to play alongside college players that are alum of the RLJGT. Our first look at the College Division was an invite only event held at the prestigious Reflection Bay Golf Club.

“This new event-series is going to benefit everyone. College players can stay on top of their game during the summer months, and aspiring college players that are still in high school can get a feel for how a college player plays the game. It’s a win-win,” says Tommy Canale, RLJGT National Scout.

We chose twenty of our best boys and sixteen of our best girls to join us for our first invitation only event featuring the College Division. Our first Reflection Bay Invitational took place this past weekend, May 25-26, and once again weather played an important part in the over-all scoring.

The event was impacted with gusting winds on both days — sometimes in excess of thirty mph, and the scores reflected the challenging conditions.  After day one, the low boys score was 76, by Jake Johnson and Austen Ancell (Regis University).  Not far off the lead after day 1 was Austin Smith with a 77 to position himself in third.  Blake Schaper rounded out the top four with a score of 78. Considering the playing conditions and the length of the course, both days over 7,000 yards, the boys performed quite well.  Heading into day 2, there were numerous players in striking distance. The start of round two could not have been more difficult; the wind was blowing 20-30 mph with a cold rain pelting the players.  Jake, (76-74/150), unfazed by the weather, fired an impressive even par 36 on the front, and cruised to an easy six shot victory over Austen Ancell (79-77/156) and Noah MacFawn (79-77/156)(Holy Names University).  In a scorecard playoff, Austen finished second. This is Jake’s first win for the year on the tour.

Get full stats from the Boys 13-18 division

The girls division was just as close with two girls scoring one over par 73’s day one.  McKenzie Hall and Yana Wilson both played steady all day and were tied for first.  Kirstin Angosta was three back with a 76, and rounding out the top four was Apelila Galeai from Utah with a 78.  Apelila pounded the ball all day long… 280 yards plus off the tee.  Kirstin Angosta took the lead at the turn with an impressive 34 on the front nine to McKenzie’s 38.  Kirstin had the lead through hole thirteen, but scoring +3 on fourteen and fifteen was ultimately her undoing.  McKenzie capitalized on the momentum shift, firing birdie-birdie on holes fourteen and fifteen to secure the win with a (73-72/145) scorecard. Twelve year-old, Yana Wilson, was in the hunt all round long, but a bogey on the par-3 seventeenth ended her shot at a victory. Yana finished in second with (73-75/148). Kirstin recovered from her two-hole difficulties and finished third with rounds of 76-73/149.

Get full stats from the Girls 13-18 division

For the results of all age groups and all players, click on the link.

Get all the pictures from the event, click on this link.

The summer part of our tour kicks off with the College Prep Championship at TPC Las Vegas for two days, and Cascata on day three.  This is a great event to get a feel for what’s its like to play in college, with 54 holes.  So, sign up quickly, the field is limited to 44 players only.