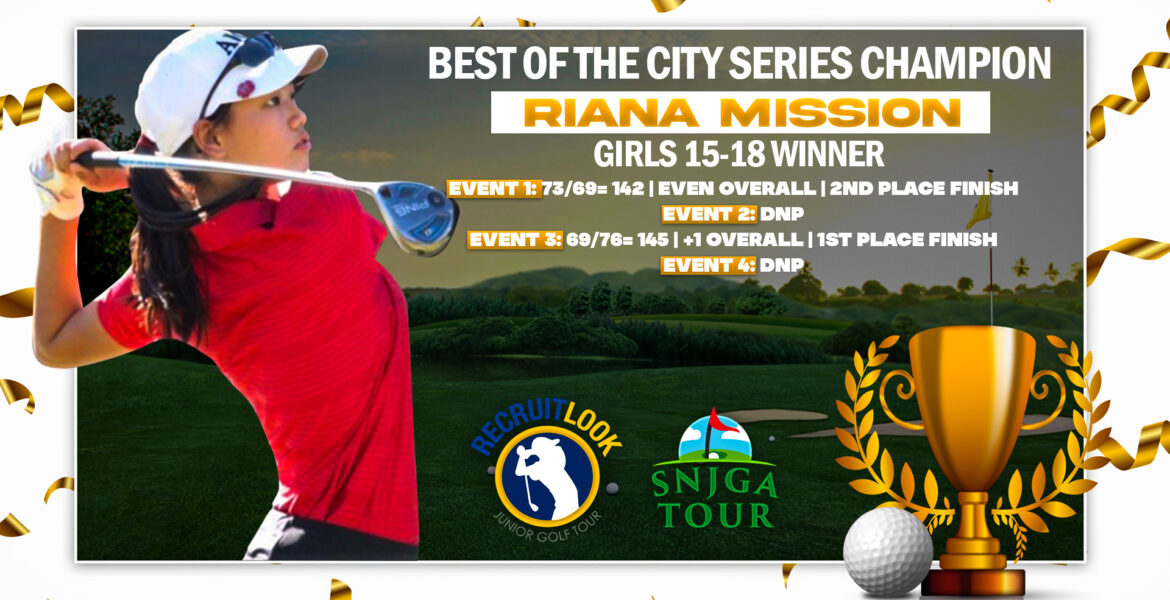 The 4 event mini-series that operated within each of the tours’ regular tour season featured 6 beautiful golf courses covering 162 holes of golf! The person left standing at the top will be considered the BEST in Las Vegas for their age division.

The golfers were challenged this year with difficult courses, scorching hot heat, elite competition, and 162 holes of mental and physical wear-and-tear. Now, the events were spread out over 4 different weekends, but the stakes were high and winners had to be on their A-game the entire time.

Congrats to Jackson Parrish on winning the Best of the City Series in 2020. Jackson is a 2021 golfer committed to Colorado School of Mines. He played some great golf throughout the mini-series with his best event coming in the last tournament where he finished 6-under after 36-holes to win by 9 strokes! Jackson played in 3 of the 4 events and finished Even overall for the tournaments helping him hold off Blake Schaper (2nd) and Will Dexheimer (3rd). Jackson’s final tournament was something special — he was dialed in all event long and ended up with 14 birdies on 54 holes.

Congrats to Eli Marshall on winning the 2020 Best of the City Series. Marshall was consistent with every round he played and battled Drake Harvey and Ralph Arone for the title. It was Eli’s consistency that helped propel him to the title — shooting between a 75 and 77 for 4 total rounds. Eli Marshall has always been atop of the leaderboards for SNJGA’s tour and RLJGT’s tour, so it is no surprise he finds himself once again atop of a leaderboard…only this time it is to claim the BEST of the City.

Congrats to Anderson Lee on winning the 2020 Best of the City Series. Anderson improved his play each event, which led to a runaway victory in the overall points race. Anderson’s third event at Pauite was his best scores, but we think his 1st place victory at the 3-day event in the last tournament was most impressive. Anderson battled for 54 holes against a stacked field, and things between Anderson and runner-up, Jack Cook, were coming down the wire. Anderson narrowly escaped with a 1-shot victory over Jack. It was Anderson’s consistency throughout the tournament that carried him to victory.

Congrats to Riana Mission on winning the Girls 15-18 division on the Best of the City Series. This age division was wide open as most of the golfers had prior commitments during the dates which limited the size of the fields from event to event. That meant that whoever was going to win was going to be the one that finished at the top — it wasn’t about cumulative points as much as it was about being top 3 when you did play. Riana went to work in both of the events that she participated in, shooting +1 overall on the 2 days. She recorded two separate rounds of 69, which are good for 2 of the 3 lowest rounds by any golfer in this age division over the course of the 4-events. Only Yana Wilson’s 67 at TPC Las Vegas was lower.

Congrats to Dakota Tallent on winning the Girls 13-14 division on the Best of the City Series. Dakota was dialed in during the 2 events she participated in and out lasted a very competitive field.  Dakota seemed to turn it on on day 2, which is a sign of a good golfer. When the stakes are high and the competition is tightening up, Dakota focused in and dropped some low numbers. This pressure playing from Dakota carried her to the crown of BEST in the City.

Congrats to Emmerson Hinds on winning the Girls 11-12 division on the Best of the City Series. Emmerson finished top 3 in every event with 2 first place finishes. A big accomplishment given the amount of talent she was up against. Emmerson’s 72 at Paiute in round 1 was the lowest score of any golfer in her age group. She was on fire that day and quite frankly, on fire the entire four events. Emmerson was consistent over the four events, shooting in the 70s for 5 of the 9 rounds. She has a bright future and will be a contender for the BEST in the City each year.

Congrats to Kensley Cova on winning the Girls 9-10 division on the Best of the City Series. Kensley had competition from several other golfers; however, the real threat each event was Kayley Provine. Kensley and Kayley were evenly matched throughout the series, but it was the final event where Kensley put her stamp on the BEST in the city. Our hats are off to each girl in this age division as they played some incredibly challenging golf courses over the 4 events. Kensley played out of this world at the final event, the LV City Challenge — the 3-day event at Dragon Ridge, Bears Best, and Southshore Country Club. Kensley won this event by 13 strokes, which led to her title as BEST in the City.