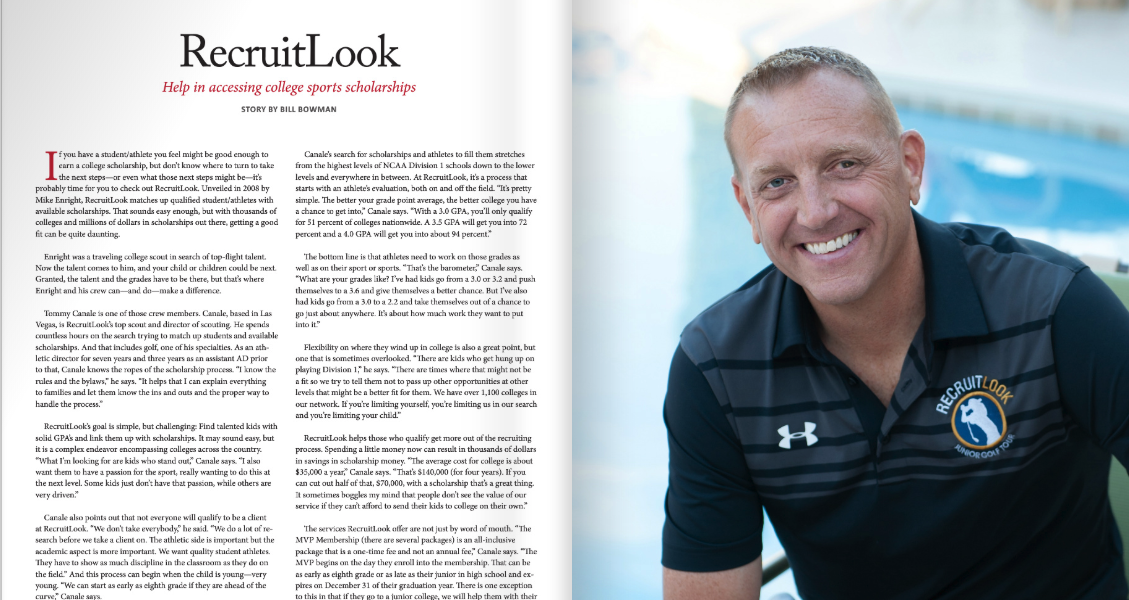 If you have a student/athlete you feel might be good enough to
earn a college scholarship, but don’t know where to turn to take
the next steps—or even what those next steps might be—it’s
probably time for you to check out RecruitLook. Unveiled in 2008 by
Mike Enright, RecruitLook matches up qualified student/athletes with
available scholarships. That sounds easy enough, but with thousands of
colleges and millions of dollars in scholarships out there, getting a good
fit can be quite daunting.

Enright was a traveling college scout in search of top-flight talent.
Now the talent comes to him, and your child or children could be next.
Granted, the talent and the grades have to be there, but that’s where
Enright and his crew can—and do—make a difference.

Tommy Canale is one of those crew members. Canale, based in Las
Vegas, is RecruitLook’s top scout and director of scouting. He spends
countless hours on the search trying to match up students and available
scholarships. And that includes golf, one of his specialties. As an ath-
letic director for seven years and three years as an assistant AD prior
to that, Canale knows the ropes of the scholarship process. “I know the
rules and the bylaws,” he says. “It helps that I can explain everything
to families and let them know the ins and outs and the proper way to
handle the process.”

RecruitLook’s goal is simple, but challenging: Find talented kids with
solid GPA’s and link them up with scholarships. It may sound easy, but
it is a complex endeavor encompassing colleges across the country.
“What I’m looking for are kids who stand out,” Canale says. “I also
want them to have a passion for the sport, really wanting to do this at
the next level. Some kids just don’t have that passion, while others are
very driven.”

Canale also points out that not everyone will qualify to be a client
at RecruitLook. “We don’t take everybody,” he said. “We do a lot of re-
search before we take a client on. The athletic side is important but the
academic aspect is more important. We want quality student athletes.
They have to show as much discipline in the classroom as they do on
the field.” And this process can begin when the child is young—very
young. “We can start as early as eighth grade if they are ahead of the
curve,” Canale says.

Canale’s search for scholarships and athletes to fill them stretches
from the highest levels of NCAA Division 1 schools down to the lower
levels and everywhere in between. At RecruitLook, it’s a process that
starts with an athlete’s evaluation, both on and off the field. “It’s pretty
simple. The better your grade point average, the better college you have
a chance to get into,” Canale says. “With a 3.0 GPA, you’ll only qualify
for 51 percent of colleges nationwide. A 3.5 GPA will get you into 72
percent and a 4.0 GPA will get you into about 94 percent.”

The bottom line is that athletes need to work on those grades as
well as on their sport or sports. “That’s the barometer,” Canale says.
“What are your grades like? I’ve had kids go from a 3.0 or 3.2 and push
themselves to a 3.6 and give themselves a better chance. But I’ve also
had kids go from a 3.0 to a 2.2 and take themselves out of a chance to
go just about anywhere. It’s about how much work they want to put
into it.”

RecruitLook helps those who qualify get more out of the recruiting
process. Spending a little money now can result in thousands of dollars
in savings in scholarship money. “The average cost for college is about
$35,000 a year,” Canale says. “That’s $140,000 (for four years). If you
can cut out half of that, $70,000, with a scholarship that’s a great thing.
It sometimes boggles my mind that people don’t see the value of our
service if they can’t afford to send their kids to college on their own.”

The services RecruitLook offer are not just by word of mouth. “The
MVP Membership (there are several packages) is an all-inclusive
package that is a one-time fee and not an annual fee,” Canale says. “The
MVP begins on the day they enroll into the membership. That can be
as early as eighth grade or as late as their junior in high school and ex-
pires on December 31 of their graduation year. There is one exception
to this in that if they go to a junior college, we will help them with their
recruitment to a four-year school as well.”

The fee covers the gamut of what the athlete and parent will need
to help their success. It includes everything from how to get start-
ed, monthly consultation, recruiting tools (college roster openings,
advanced scholarship searches, insider tips, email templates) and
much more. “It is one-stop shopping for parents and students to get
themselves on the road to alleviating some of the financial burden that
comes with college tuition,” Canale says.

He threw out a few more numbers that should start parents to think-
ing about the odds their kids face. These numbers involved golf. “There
will be roughly 215,000 kids playing golf this year in high school
nationwide,” he says. “And out of those kids, only eight percent will play
golf at the next level. When we can get a kid who is in the 92-percent
group and flip them to the 8 percent group, that’s very rewarding for
us, and for the family.” And don’t worry if you’re not a scratch golfer.
Canale points out girls who shoot scores of 92 or better and boys who
post 82 or better are potentials for scholarships.

Canale closed with a simple thought. “Las Vegas is my backyard,” he
says. “I’m trying to help as many kids here as possible. We have golfers
in other states, but Las Vegas is where I want to help the most kids.
I’ve been doing this since 2014. We want to continue to grow and help
parents and kids succeed.”