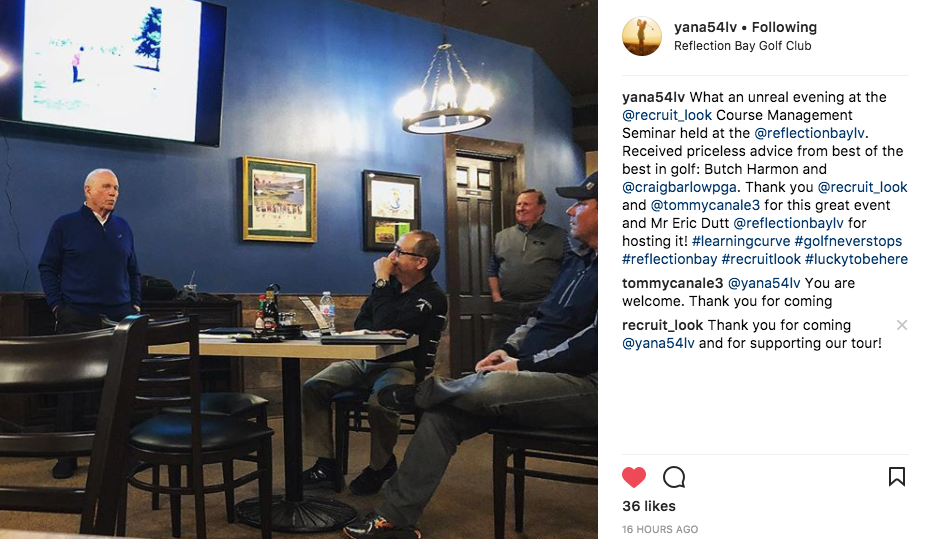 A who’s who of golf figures were at RecruitLook’s very first Course Management Seminar, co-hosted with Reflection Bay Golf Course and Eric Dutt.

Not everyday can a junior golfer listen to some of the very best in the game of golf speak about how to improve as an all-around golfer.

So, who are some of the very best that dropped knowledge?

Eyes wide open and jaws hit the floor (from junior golfers & parents!) when Butch Harmon was introduced as a speaker. Harmon spoke for nearly an hour on a wide arrange of topics, including: the scorecard is the ultimate barometer no matter how you scored what you scored, what makes Jack Nicklaus and Tiger Woods so special, and how he (Butch) learned the game from his Master’s winning father… just to highlight some of Butch’s talking points.

Craig Barlow has won over Five-Million-Dollars on the PGA Tour. Let that sink in. So, when he has a few things to say about golf, you know he had the rooms full attention. Barlow is still actively competing on the PGA Tour, while also teaching golf in Las Vegas. The knowledge he shared with the junior golfers is something not many junior golfers can say they were privy too.

We cannot thank Eric Dutt and Reflection Bay enough for allowing us to co-host this amazing event.

Thank you to Butch and Craig for taking time out of their busy schedules to spend time with the junior golfers in Las Vegas.